What conventional chewing gums are made of

Have you ever tried to find out what the gum bases of conventional chewing gum are made of? It’s not that easy - since they are only listed as “gum base” on the ingredients lists.

The gum base of conventional chewing gum

We ourselves did not know before what chewing gum is made of. Despite the fact that we actually had a rather sustainable lifestyle. We lived vegetarian, avoiding plastic where we could. But we never really thought about gum. Even when we started asking people in our circle of friends and acquaintances, we noticed that hardly anyone had really thought about chewing gum.

This is probably mainly due to the fact that the gum base of conventional chewing gums is not clearly declared, but is only mentioned on the packages under the designation “gum base”. What this means exactly cannot be found on the manufacturers’ websites either. Consumers are left in the dark about the exact composition of the product. And yet, they get away with it.

We didn’t give up and started researching. On Wikipedia you come across the following explanation:

“Today, the majority of chewing gum base is made from petrochemical materials. It is made from plastics, mostly polyisobutylene and polyvinyl acetate. 50 to 70% of chewing gum is sugar, the rest are fillers such as aluminium oxide, silicic acid or cellulose. Also included are softeners, humectants, antioxidants, flavours, acids, dyes and emulsifiers”.

Apart from the fact that conventional chewing gums are made of plastics, they usually contain other - potentially harmful - additives. For example, the antioxidant BHA (butylated hydroxyanisole) is suspected of having an estrogenic effect, similar to the better known parabens. The artificial sweeteners aspartame and acesulfame K are also being avoided by more and more people for health reasons. In addition, there are sugars that are harmful to the teeth and whitening agents such as titanium dioxide. 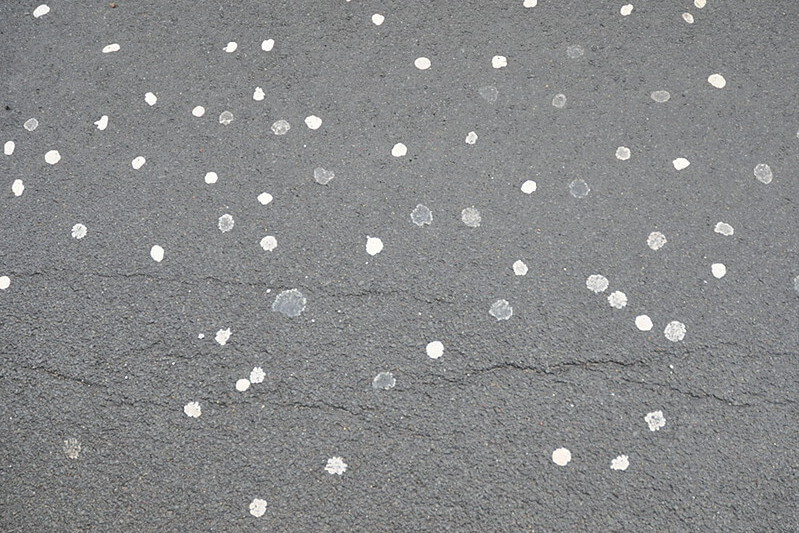 Everyone knows it, but hardly anyone notices it anymore: You can’t walk two meters in a city without seeing a white or black chewing gum stain on the ground.

Cleaning that up is a great challenge for cities. Above all, it is hardly economically viable to remove the chewing gum. You can’t get rid of them with normal brushes; you need special equipment that cleans with superheated steam. The costs vary depending on the amount of work and cleaning methods and amount to approximately [20 euros per square meter](). This corresponds to approximately 2€ per removed chewing gum. Some British cities are therefore considering introducing a tax on chewing gum”).

The fact that chewing gums bond so well with asphalt is also due to the fact that they are very similar in their composition (on closer inspection, you can even find that well-known tyre manufacturers offer gum bases!). In the environment, chewing gums take many years to decompose - and even then they probably remain as microplastics. The packaging of most chewing gums is made of plastic and/or aluminium, which of course maximises the negative environmental impact. Well, bon appétit!